On the basis of following observations made with aqueous solutions, assign secondary valencies in the following compounds. 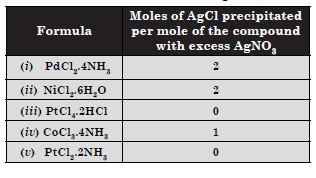 Write the formulae of the following coordination compounds :

Write the IUPAC names of the following coordination compounds :

Why is geometrical isomerism not possible in tetrahedral complexes having two different types of unidentate ligands coordinated with the central metal ion ?

Tetrahedral complexes do not show geometrical isomerism because the relative positions of the unidentate ligands attached to the central metal atom are the same with respect to each other. 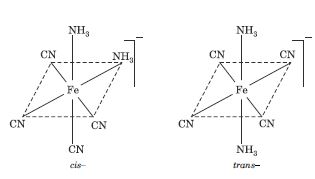 Which out of the following two coordination entities is chiral (optically active)?

The two entities are represented as: 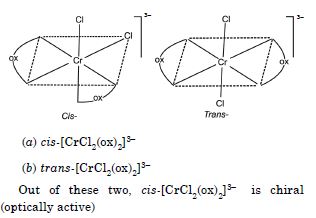 The spin only magnetic moment of [MnBr4]2– is 5.9 B.M. Predict the geometry of the complex ion. 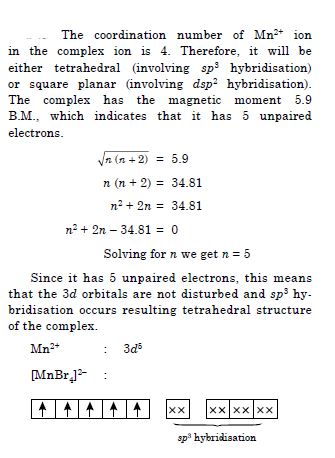 Indicate the types of isomerism exhibited by the following complexes and draw the structures for these isomers : 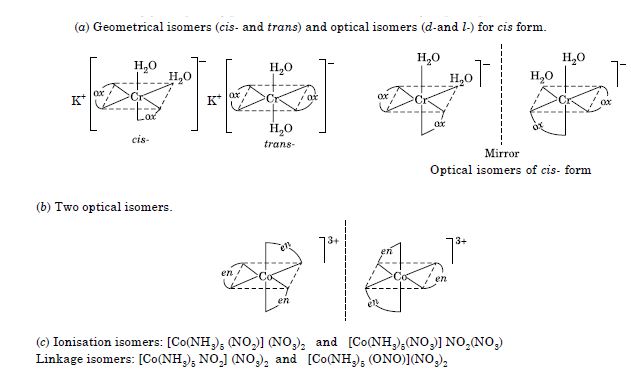 Explain on the basis of valence bond theory that [Ni(CN)4]2– ion with square planar structure is diamagnetic and the [NiCl4]2– ion with tetrahedral geometry is paramagnetic. 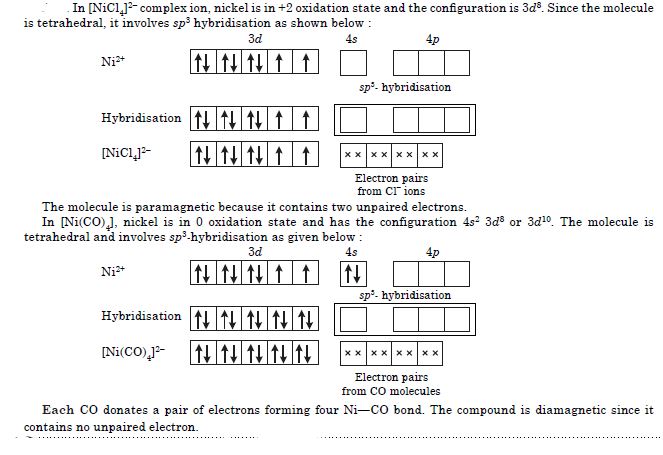 Explain the bonding in coordination compounds in terms of Werner’s postulates.

Using IUPAC norms write the formulas for the following :

List various types of isomerism possible for coordination compounds, giving an example of each.

Two or more compounds having the same molecular formula but different arrangement of atoms are called isomers and the phenomenon is called isomerism. Isomers can be broadly classified into two major categories :

(A) Structural isomers (B) Stereoisomers. 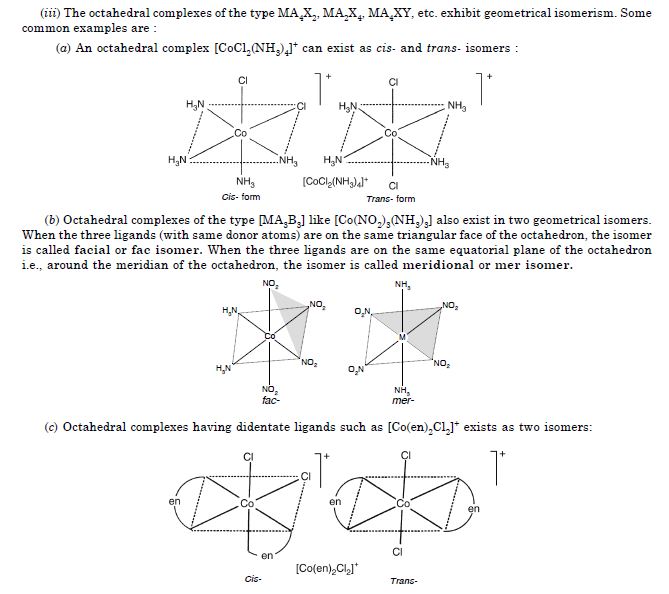 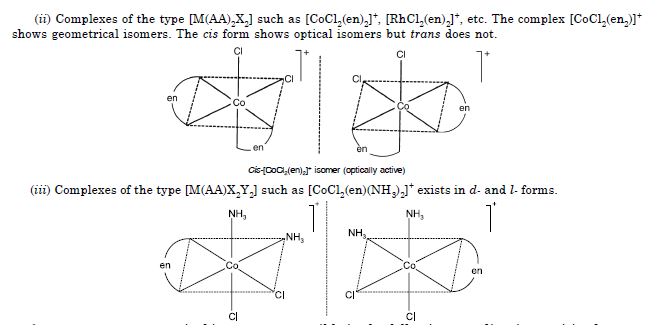 Write all the geometrical isomers of [Pt(NH3)(Br)(Cl)(py)] and how many of these will exhibit optical isomers ? 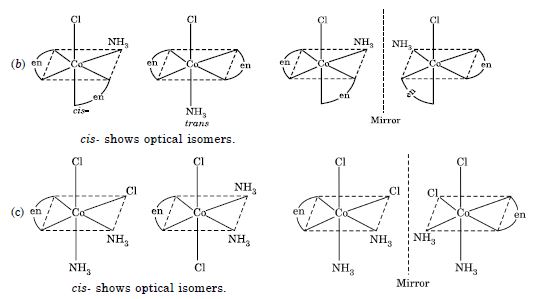 What is the coordination entity formed when excess of aqueous KCN is added to an aqueous solution of copper sulphate ? Why is it that no precipitate of copper sulphide is obtained when H2S(g) is passed through this solution ?

Discuss the nature of bonding in the following coordination entities on the basis of valence bond theory: 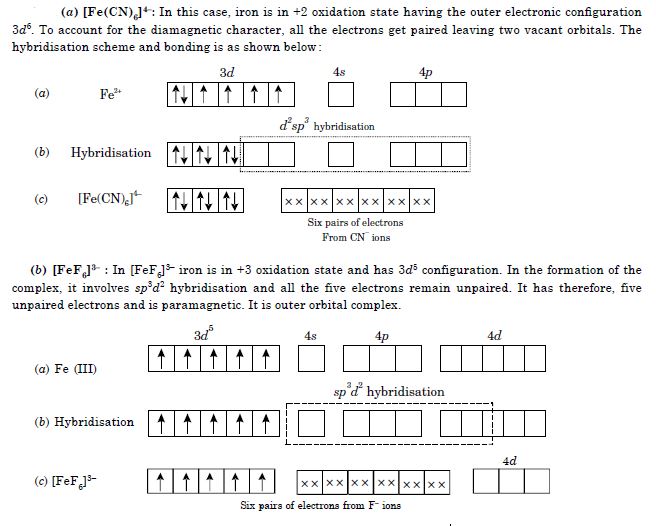 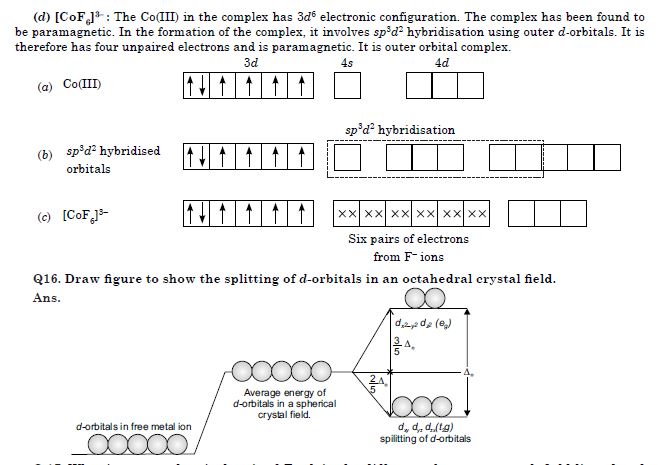 Draw figure to show the splitting of d-orbitals in an octahedral crystal field.

What is spectrochemical series ? Explain the difference between a weak field ligand and a strong field ligand.

The arrangement of ligands in the increasing order of crystal field splitting is called spectrochemical series. This is shown below :

What is crystal field splitting energy? How does the magnitude of 0 decide the actual configuration of d-orbitals in a coordination entity ?

The magnitude of 0 helps to predict the actual configuration of the complex. If 0 is large (as it is for strong field ligands), the electrons will try to remain in the lower set of orbitals. In this case, the complex has less number of unpaired electrons and is called low spin complex.

In this case, the repulsion due to pairing of electrons will be less than 0.

On the other hand, if 0 is small (as it is for weak field ligands), then after filling the lower set of three orbitals with one electron each, the next electron goes to the higher set of orbitals. In this case, the repulsion due to pairing of electrons will be more than 0. The pairing of electrons will occur only after all the five orbitals are singly filled. In this case, the complex will have maximum number of unpaired electrons and is calld high spin complex.

Thus, the actual configuration adopted by the complex is decided by the relative values of 0 and P where P represents the energy required for electron pairing in a single orbital.

For example, for d

Discuss the nature of bonding in metal carbonyls.

The bonding in metal carbonyls is described by the following steps :

Give the oxidation state, d-orbital occupation and coordination number of the central metal ion in the following complexes:

Write down the IUPAC name for each of the following complexes and indicate the oxidation state, electronic configuration and coordination number. Also give stereochemistry and magnetic moment of the complex : 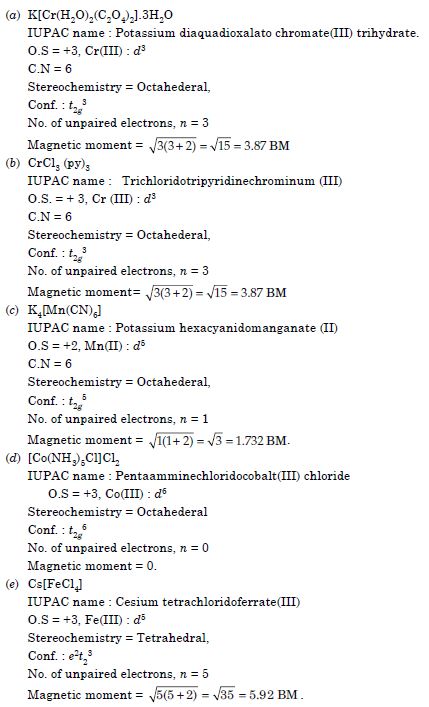 What is meant by the chelate effect ? Give an example.

Chelate effect : The stability of a complex depends upon the formation of chelate rings. If the ligand, L is an unidentate ligand and L–L, a didentate ligand and if the donor atoms of L and L–L are the same element, then L–L will replace L. This stabilisation due to the chelation is called chelate effect. The enhanced stability of complexes containing chelating ligands is of great importance in biological systems and analytical chemistry. The chelate effect is maximum for 5- and 6-membered rings. In general, rings provide greater stability to the complex.

Discuss briefly giving an example in each case the role of coordination compounds in : 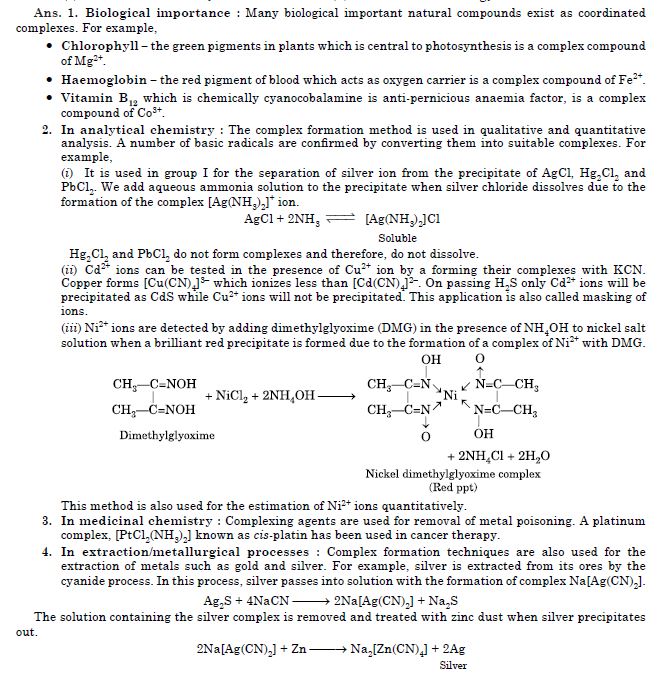 Similarly, the cyanide process is used for the extraction of gold.
Similarly, purification of metals can also be achieved through formation nd subsequent decomposition of their coordination compounds. For example, impure nickel is converted to [Ni(CO)4], which is decomposed to get pure nickel.

The oxidation number of cobalt in K[Co(CO)4] is

(c) is most stable because it is chelate.

What will be the correct order for the wavelengths of absorption in the visible region for the following: