Why do transition elements exhibit higher enthalpies of atomization ?

Name a transition element, which does not exhibit variable oxidation states.

Why is Cr2+ reducing and Mn3+ oxidising when both have d4 configuration?

How would you account for the increasing oxidising power in the series :

This is due to the increasing stability of the lower species to which they are reduced.

For the first row transition metals, the

Explain the irregularity in the above values

Calculate the magnetic moment of a divalent ion in aqueous solution if its atomic number is 25.

Divalent ion in aqueous solution having atomic number 25 will have d5 configuration.
No. of unpaired electron = 5

What is meant by dispropor-tionation of an oxidation state ? Give one example.

Name a member of lanthanoid series which is well known to exhibit +4 oxidation state.

Silver atom has completely filled d-orbitals (4d10) in its ground state. How can you say that it is a transition elements ?

Which of the 3d series of the transition metals exhibits the largest number of oxidation states and why ?

The copper has high enthalpy of atomisation and enthalpy of ionization. Therefore, the high energy required to transform Cu(s) to Cu2+ (aq) is not balanced by its low enthalpy of hydration.

How would you account for the irregular variation of ionisation enthalpies (first and second) in the first series of transition elements ?

The irregular trend in variation of ionisation enthalpies in the first series of transition elements is because of varying degree of stability of different configurations.

Why is the highest oxidation state of a metal exhibited in its oxide or fluoride only ?

Because oxygen and fluorine have small size and high electronegativity, therefore, they can easily oxidise the metal to its highest oxidation state.

Which is a stronger reducing agent Cr2+ or Fe2+ and why ?

Cr2+ is a stronger reducing agent than Fe2+. This is because the configuration of Cr2+ changes from d4 to d3 and d3 configuration is stable (t2g3) being half filled t2g level.

It has 3 unpaired electrons. The spin only magnetic moment is

Explain why Cu+ ion is not stable in aqueous solution ?

Cu+(aq) is not stable in aqueous solution because of its less negative enthalpy of hydration than of Cu2+ (aq).

Write down the electronic configuration of :

Why are Mn2+ compounds more stable than Fe2+ towards oxidation to their +3 state ?

Explain briefly how +2 state becomes more and more stable in the first half of the first row transition elements with increasing atomic number ?

As we move in the first row transition elements, the sum of IE1 and IE2 increases. As a result reduction potential (E) becomes less and less negative and hence the stability decreases upto first half of the first row elements.

To what extent do the electronic configurations decide the stability of oxidation states in the first series of the transition elements? Illustrate your answer with examples.

What may be stable oxidation state of the transition element with the following d-electron configurations in the ground state of their atoms : 3d3, 3d5, 3d8, and 3d4?

Name the oxometal anions of the first series of the transition metals in which the metal exhibits the oxidation state equal to its group number.

(i) It has very important effect on the relative properties of the elements which follow the lanthanoids with those which proceed the lanthanoids. We know that there is a regular increase in size as we go from Sc to Y to La in group 3. Similarly, we expect normal, increase in size in other groups from Ti Zr Hf
V Nb Ta
However after lanthanoids, the increase in radii from second to third transition series vanishes.
Consequently, the pairs of elements Zr—Hf,
Nb—Ta, Mo—W, etc. have almost similar sizes.
Therefore, the properties of these elements are similar.

(ii) There is small but steady increase in the standard electrode potential values (E) for the process :
M3+ + 3e

(iii) The basic strength of oxides and hydroxides decrease with increase in atomic number. Thus, La(OH)3 is most basic and Lu(OH)3 is least basic.

The general characteristics of d-block elements are :

The elements Zn, Cd and Hg are not regarded as transition elements because they donot have partly filled d-subshells in their elementary state or in their commonly occurring oxidation states.

What are the different oxidation states exhibited by the lanthanoids ?

What are interstitial compounds ? Why are such compounds well known for transition metals ?

The crystal lattices of transition metals have vacant interstitial sites into which small sized non-metal atoms (H, C, N, B) can easily fit, resulting in the formation of compounds known as interstitial compounds. These are usually non-stoichiometric and are neither typically ionic nor covalent. For example, TiC, Mn4H, Fe3H, TiH1.7, etc. They have chemical properties similar to that of the parent metal but different physical properties such as hardness, electrical conductivity, etc. 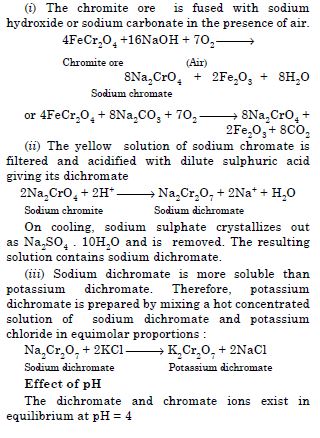 Describe the oxidising action of potassium dichromate and write the ionic equations for its reaction with : (a) iodide (b) iron (II) solution, and (c) H2S. 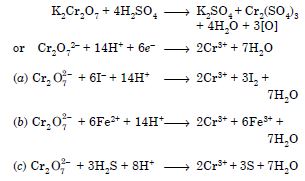 Describe the preparation of potassium permanganate. How does the acidified permanganate solution reacts with (a) iron (II) ions (b) SO2 and (c) oxalic acid ? Write the ionic equations for the reactions.

Preparation of KMnO4. It is prepared from the mineral pyrolusite (MnO2) by the following steps :
The pyrolusite (MnO2) is fused with caustic potash (KOH) or oxidising agent such as potassium nitrate or potassium chlorate to give a green mass due to the formation of potassium manganate.

The green mass disproportionates in a neutral or acidic solution to give permanganate :

Commercially potassium permanganate is prepared by the alkaline oxidative fusion of MnO2 followed by electrolytic oxidation of manganate (VI). 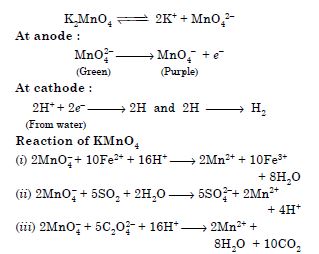 (b) Reduction potential for Mn2+|Mn is most negative and, therefore, it will be most easily oxidized and ease of getting oxidized will be Mn > Cr > Fe.

The disproportionation reactions are those in which the same substance gets oxidised as well as reduced. For example,

Which metal in the first series of transition metals exhibits +1 oxidation state most frequently and why?

Copper has electronic configuration [Ar] 3d10 4s1. It can easily lose one (4s1) electron to give stable 3d10 configuration.

Calculate the number of unpaired electrons in the following gaseous ions: Mn3+, Cr3+, V3+ and Ti3+. Which one of these is most stable in aqueous solution?

Give example and suggest reasons for the following features of the transition metal chemistry : 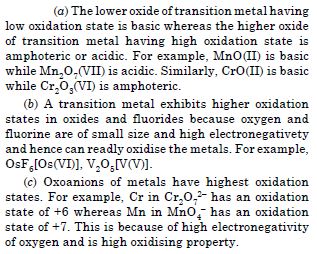 What are alloys? Name an important alloy which contains some of the lanthanoid metals. Mention its uses.

An alloy is a homogeneous mixture of two or more metals or metals and non-metals.
An important alloy of lanthanoid metals is mischmetal. It contains about 95% lanthanoid metal and about 5% iron and traces of S, C, Ca or Al. It is used in magnesium based alloy to produce bullets, shells and lighter flints.

The chemistry of the actinoid elements is not so smooth as that of the lanthanoids. Justify this statement by giving some examples from the oxidation state of these elements.

Use Hund’s rule to derive the electronic configuration of Ce3+ ion and calculate its magnetic moment on the basis of ‘spin-only’ formula. 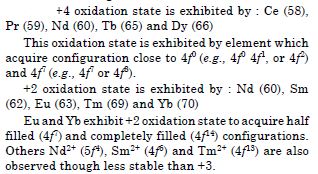 Write the electronic configurations of the elements with the atomic numbers 61, 91, 101 and 109.

Compare the general characteristics of the first series of the transition metals with those of the second and third series metals in the respective vertical columns. Give special emphasis on the following points : 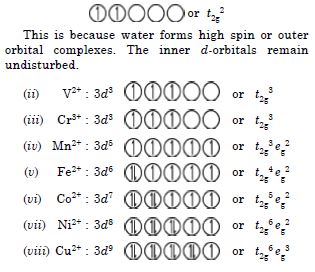 Comment on the statement that elements of the first transition series possess many properties different from those of heavier transition elements.

The first transition series possess many properties different from those of heavier elements such as :

What can be inferred from the magnetic moment values of the following complex species? 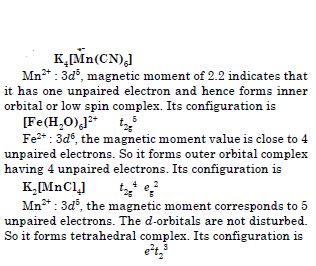