Draw the structures of all the eight structural isomers that have the molecular formula C5H11Br. Name each isomer according to their IUPAC system and classify them as primary, secondary or tertiary.

Identify all the possible monochloro structural isomers expected to be formed on free radical monochlorination of (CH3)2CHCH2CH3.

Write the products of the following reactions :

The cyanide ion is a resonance hybrid of the following structures :

KCN is predominantly ionic and therefore, both C and N atoms are free to donate electron pair. Since, C—C bond is relatively more stronger than C—N bond, therefore, the attack occurs mostly through the carbon atom of the cyanide group forming alkyl cyanides as the major product.

On the other hand, AgCN is predominantly covalent. Therefore, in the case only N atom is free to donate electron pair and the attack mostly occurs through the N atom of the cyanide group forming alkyl isocyanides as the major product.

Predict the order of reactivity of the following compounds in SN1 and SN2 reactions :

(a) The four isomeric bromobutanes

(a) The four isomeric bromobutanes are : 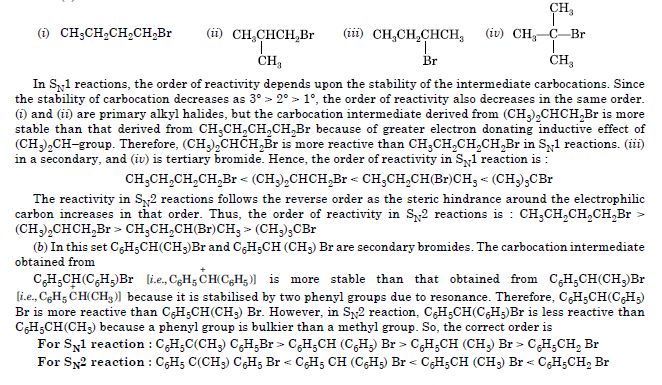 Identify chiral and achiral molecules in each of the following pairs of compounds :

Although chlorine is an electron withdrawing group, yet it is ortho-, para- directing in electrophilic aromatic substitution reactions. Why? 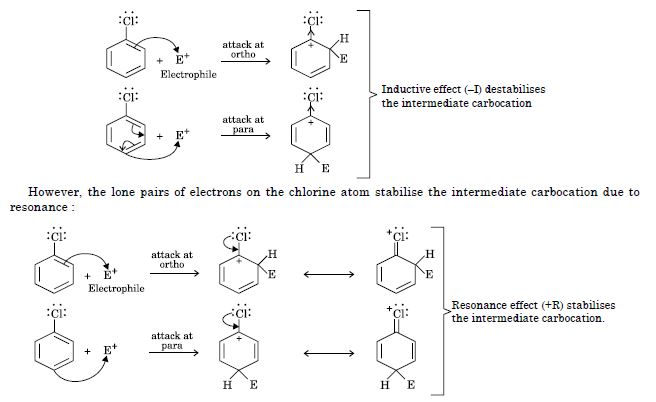 Since –I effect of Cl is stronger than its +R effect, therefore, causes electron withdrawal and this causes net deactivation. The resonance effect tends to oppose the inductive effect for attack at ortho and para position and hence makes deactivation less for ortho- and para- attack. Thus, we can say that the reactivity is controlled by the stronger inductive effect and orientation is controlled by the resonance effect. Thus, although chlorobenzene is less reactive than benzene but it is ortho, para directing in electrophilic substitution reaction.

Write structures of the following compounds : 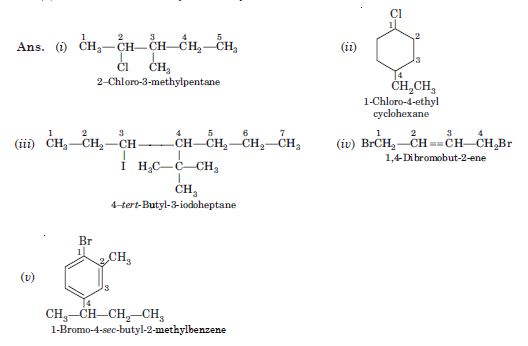 Why is sulphuric acid not used during the reaction of alcohols with KI?

Sulphuric acid is an oxidising agent. It will oxidise HI produced during the reaction to I2 and therefore, will prevent the reaction between an alcohol and HI to form alkyl iodide.

Four isomeric dihalogen derivatives of propane are formed. For example,

Among the isomeric alkanes of molecular formula C5H12, identify the one that on photochemical chlorination yields:

Draw the structure of major monohalo products in each of the following reactions : 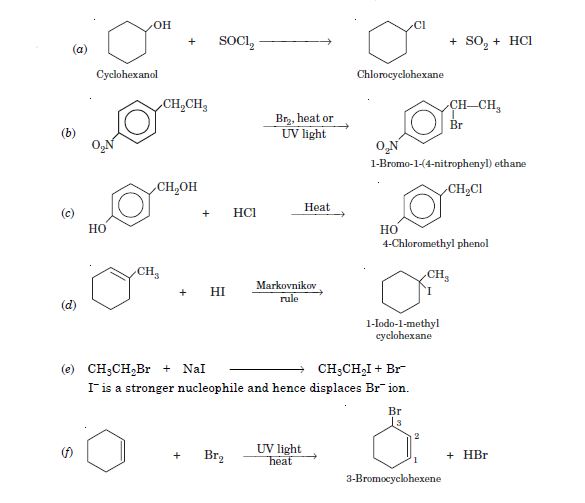 Arrange each set of compounds in order of increasing boiling points.

Which alkyl halide from the following pairs would you expect to react more rapidly by an SN2 mechanism ? Explain your answer.

In the following pairs of halogen compounds, which compound undergoes faster SN1 reaction ?

The reactivity of alkyl halide towards SN1 reaction depends upon the stability of the carbocation formed as 3 > 2 > 1. 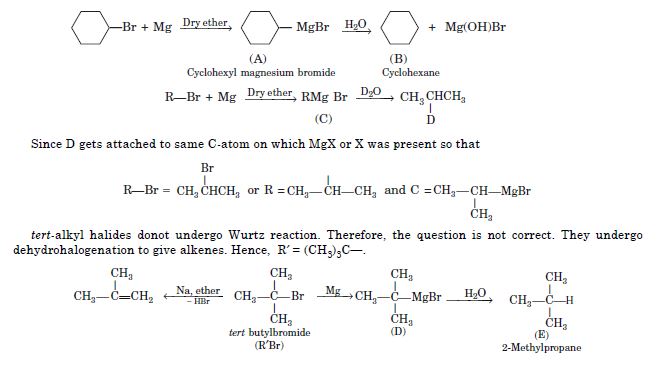 Name the following halides according to IUPAC system and classify them as alkyl, allyl, benzyl (primary, secondary, tertiary), vinyl or aryl halides :

Give the IUPAC names of the following compounds :

Write the structure of the following organic halogen compounds : 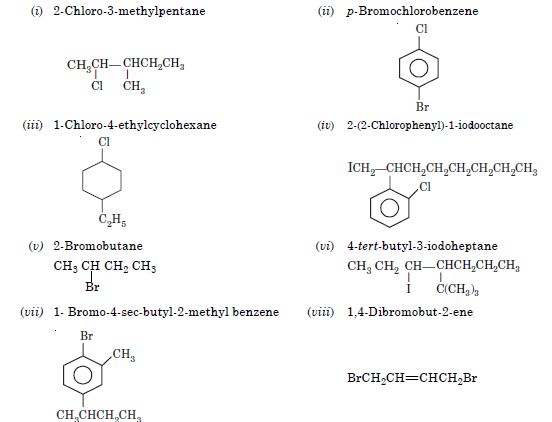 Which one of the following has highest dipole moment ?

Write the isomers of the compound having formula C4H9Br.

The compound is saturated C4H4×2+1Br. It has following four isomers :

What are ambident nucleophiles ? Explain with an example.

Which compound in each of the following pairs will react faster in SN2 reaction with OH– ?

Predict all the alkenes that would be formed by dehydrohalogenation of the following halides with sodium ethoxide in ethanol and identify the major alkene : 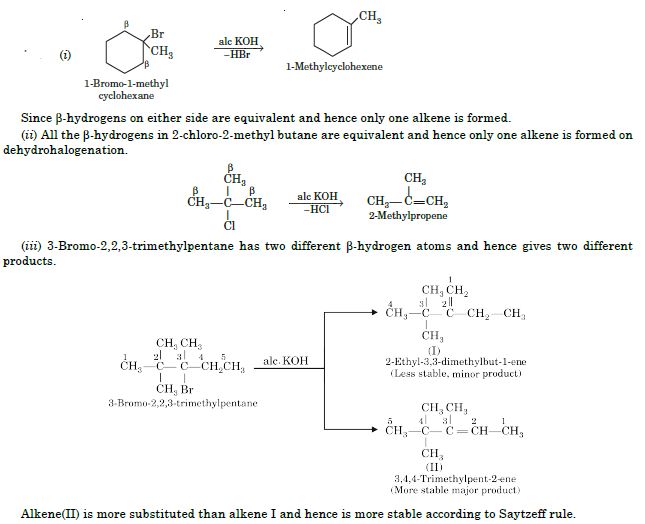 How will you bring the following conversions? 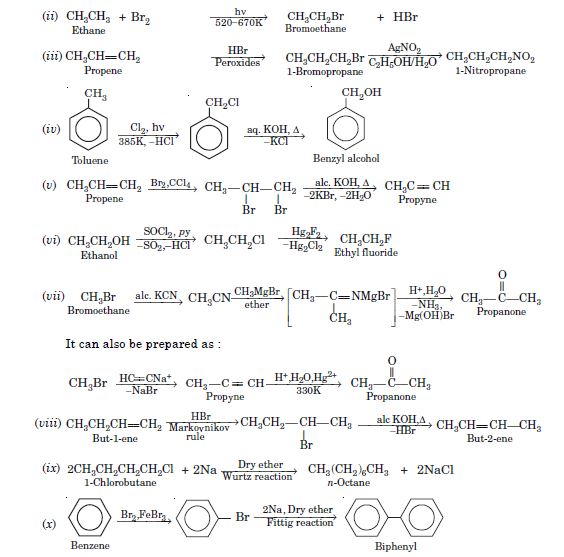 Give the uses of Freon 12, DDT, Carbon tetrachloride and Iodoform.

Write the structure of the major organic product in each of the following reactions : 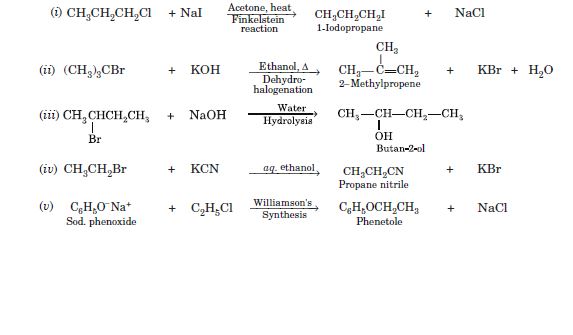 KCN has nucleophile CN– ion which is ambident nucleophile because of the following two contributing structures:
–:CN: :C===N:–
Therefore, it can attack the carbon atom of C—Br bond in n-BuBr either through C or N. Since C—C bond is stronger than C—N bond, therefore, the attack occurs through C to form n-butyl cyanide as given below :

Arrange the compounds of each set in order of reactivity towards SN2 displacement : 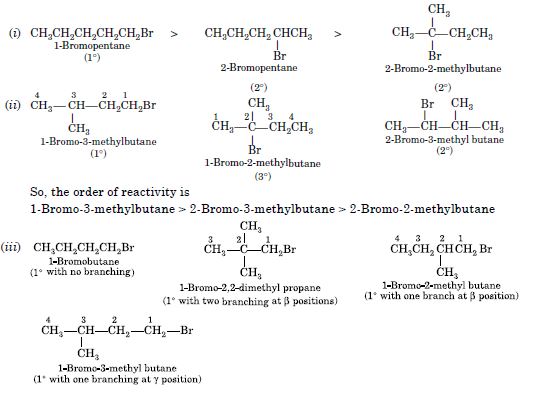 p-Dichlorobenzene has higher m.p. than those of o- and m-isomers. Discuss.

How the following conversions can be carried out ? 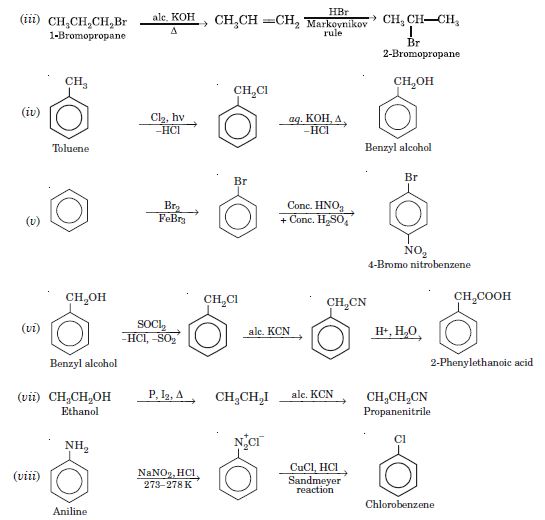 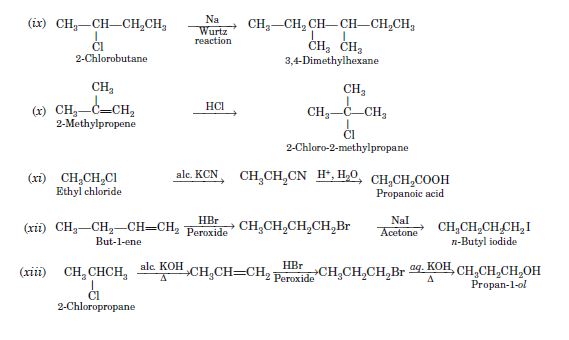 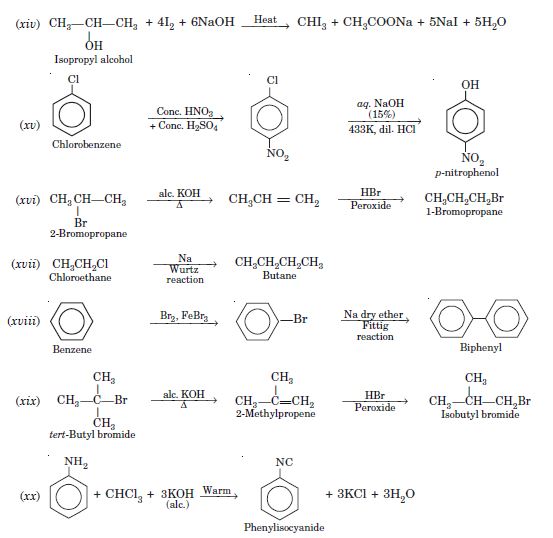 The treatment of alkyl chlorides with aqueous KOH leads to the formation of alcohols but in presence of alcoholic KOH, alkenes are major products. Explain.

In aqueous KOH, KOH is almost completely ionized to give OH– ions. These being strong nucleophiles result into substitution reaction on alkyl chlorides to form alcohols. Moreover, in aqueous solution, the OH– ions are highly hydrated (solvated). The hydration reduces the basic character of OH– ions which therefore, fails to abstract a hydrogen from the -carbon of the alkyl chloride to form an alkene. On the other hand, an alcoholic solution of KOH contains alkoxide (RO–) ions which being stronger base than OH– ions preferentially eliminates a molecule of HCl from an alkyl halide to form alkenes.

(i) Two primary alkyl halides having the molecular formula C4H9Br are possible. These are : 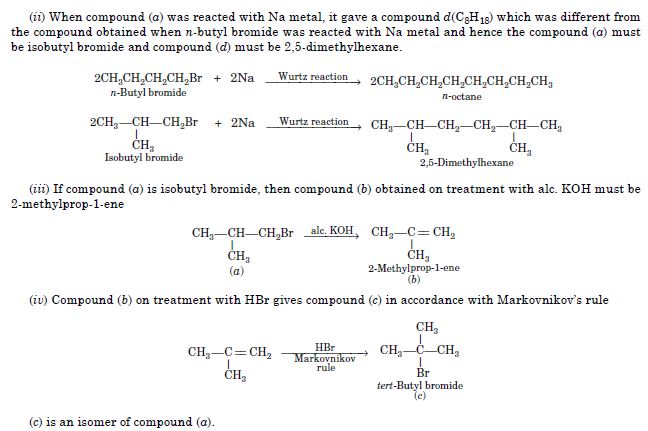 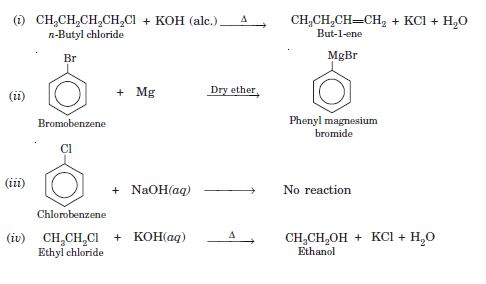